A total of approximately 10 acres of land will be made available for development as a result of New Haven’s Downtown Crossing Project. The land parcels were previously unavailable for use or development activities due to the former Route 34 expressway right-of-way. Access to this land presents new economic development opportunities for the City, including health science and technology startups from Yale University, while preserving New Haven’s existing neighborhoods.

Phase 1 of Downtown Crossing reclaimed approximately 2.4 acres of developable land, allowing for private investment and the construction of a 14-story, 450,000 square foot research facility at 100 College Street in New Haven. In early 2016, New Haven celebrated the completion of Phase 1 of Downtown Crossing, which culminated in Alexion Pharmaceuticals moving in to the new 495,000 s.f. med/lab office building at 100 College Street.  Following a recent company restructuring, 100 College Street is now home to Alexion’s Global Center for Research Excellence.  With 450 employees on site, Alexion is the largest single research facility in New Haven.

Phase 3 construction enables access to two land parcels for new development: 1.63 acres between College and Temple Streets and 1.23 acres between Temple and Church Streets. In addition to being previously inaccessible, these parcels were unavailable for use or development due to the former Route 34 expressway right-of-way. The land value of the two new development parcels will increase from $0 to approximately $47 per square foot, yielding tax revenues and economic benefits to the City. It is estimated that the entire Downtown Crossing Project could yield net tax revenues of approximately $1.434 million. Phase 1 alone has boosted the City of New Haven’s grand list by over $3 million.

Complete Streets are designed to enable safe access for all users including pedestrians, bicyclists, motorists, and transit riders of all ages and abilities.

In an urban community like New Haven, the concept of Complete Streets goes beyond safety for different modes of transportation, and is connected to issues of health, equity, aesthetics, economic development, environmental protection, and livability, all within a specific neighborhood context.

Complete Streets design takes the approach that the city’s streets are public spaces. At their best, streets should:

At full build, Downtown Crossing will restore the multi-modal connectivity that was severed when the Route 34 expressway was built in 1959. There will be more connections for pedestrians, bicyclists, motor vehicles, and public transit between Downtown New Haven, the Hill neighborhood, Union Station, and the Medical District.

New direct routes, pedestrian crossings and refuges, a public plaza, landscaped pocket parks, and wide sidewalks will reduce the automobile dominance that currently exists in the project area, thus creating an environment for pedestrians to travel safely, to linger, and to activate new downtown open space.

Downtown Crossing is designed as compliant with New Haven’s Complete Streets policy. New Haven’s Complete Streets is a transportation policy and design approach that requires streets to be planned, designed, operated, and maintained to enable safe, convenient and comfortable travel and access for users of all ages and abilities regardless of their mode of transportation, including pedestrians, bicyclists, motorists and transit riders. 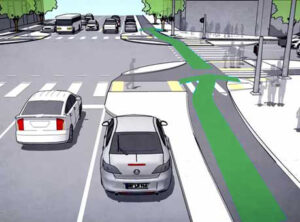 Traffic calming measures include narrow vehicle lanes to slow speed and signage and pavement markings noting the reduced speed limit of 25 MPH. Landscaping, way-finding signage, decorative light poles, and pedestrian refuges alert drivers that they are no longer on an expressway, but in a populated urban area. The speed limit will be reduced to 25 MPH and driving lanes narrowed to encourage drivers to travel at a lower speed.

Compared with the ten largest cities in New England, New Haven already has the highest percentage of commuters who walk to work (13.6%) and use non-motorized transportation (15.5%), according to the last decennial US Census.

By enhancing safe pedestrian and bicycle mobility, Downtown Crossing is expected to boost the number of commuters choosing non-motorized transportation. At full build, Downtown Crossing is expected conservatively to result in a mode shift from 73.7% single occupancy vehicles to 65.5% therefore reducing reliance on automobiles and lowering emissions.

The Project utilizes infiltration basins and bioswales to treat, attenuate and reduce the volume of storm water runoff leaving the area. Along major streets, the Project incorporates tree bioswale systems to filter and infiltrate water before it enters the storm sewer system. The bioswales and infiltration basin will capture and treat 5 inches of rainfall (corresponding to a 10-year storm event) from any individual storm.

Context and Cohesion with Other City of New Haven Development Projects

Downtown Crossing builds upon the expansion of the Yale University Medical District and other private and public development in the Project area. Since 2010, three major new facilities have been built within a few blocks of the Route 34 corridor and are fully occupied. The growth of these institutions is important for the economic health of the nation, not just New Haven and Connecticut.

The corridor has also seen the completion of two new mixed-use development buildings and the relocation of Gateway Community College, all of which assist the economic growth of New Haven.

Recent developments include the following major public and private investments in the vicinity of Downtown Crossing:

Downtown Crossing also fits into other planned City of New Haven initiatives such as the Hill to Downtown Plan. The Hill to Downtown Plan seeks to redevelop a significant portion of an underdeveloped area into an affordable mixed use, mixed income, transit-oriented-development neighborhood between downtown New Haven, Union Station and the Medical District.