From Expressway to Urban Boulevards

Phase 1, which began in 2013 and was completed in 2016, began the process of transforming the former Route 34 highway into urban boulevard system comprised of two one-way roadways, Rev. Dr. Martin Luther King, Jr. (MLK Jr.) Boulevard heading west and South Frontage Road heading east. The driving lanes on MLK Jr. Boulevard and South Frontage Road have been narrowed to slow traffic, and the speed limit lowered to 25 miles per hour.

Below-grade roads were constructed to serve as access roads to and from the Air Rights Garage, over which College Street was reconstructed with bicycle and pedestrian-friendly improvements.

As a result of Phase 1 infrastructure work, approximately 2.4 acres of developable land was reclaimed, allowing for private investment and the construction of a 14-story, 450,000 square foot research facility located at 100 College Street, which is fully leased and contributing to the City’s tax base. 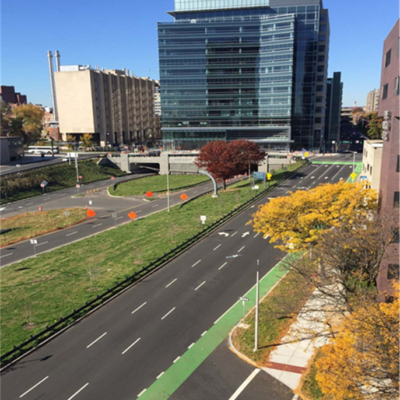 100 College Street and the project area at the end of Phase 1 construction.